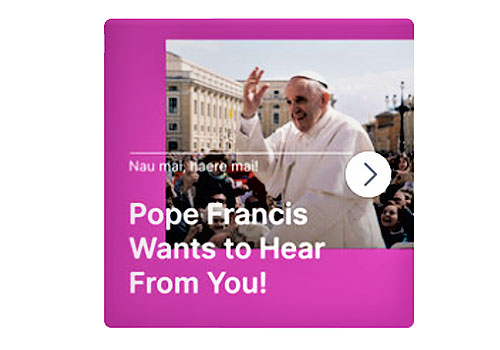 “Pope Francis wants to hear from you” is the message the Catholic Church in Aotearoa New Zealand is using to invite people – Catholic or not – to take part in a survey for an international synod on the future direction of the Church.

The Catholic Church world-wide is conducting a two-year synod process to let the Pope know what ordinary Catholics think. Begun by Pope Francis last October, the process is currently asking Catholics in parishes and dioceses for their views.

Bishop of Auckland and Secretary of the NZ Catholic Bishops Conference, Bishop Stephen Lowe, says the country’s six dioceses have embraced the opportunity for people to have their say in synod conversations taking place in parishes, schools and Church organisations.

The survey is being advertised on Stuff and in social media such as Facebook. Under a photograph of Pope Francis, it asks people whether they had felt welcomed and supported by Catholics, how Catholics could journey with people better, were they currently connected to a Catholic faith community, and what other comments they would like to share.

“Catholics are encouraged to participate themselves, but also to invite their non-Catholic friends and families to share their thoughts,” Bishop Lowe said. “Most parishes and all dioceses have ways for parishioners to contribute to the process. This survey is for people not reached that way.”

This national feedback survey closes March 22. The diocesan part of the synod process finishes in March or April depending on the diocese. The NZ Catholic Bishops Conference will then prepare a report that will eventually be part of feedback to synod of bishops from around the world in Rome in October next year.

This synod process is officially called For a Synodal Church: Communion, Participation and Mission. It is the 16th Ordinary General Assembly of the Synod of Bishops in the Catholic Church. A synod of bishops is regarded as an advisory body for the Pope.