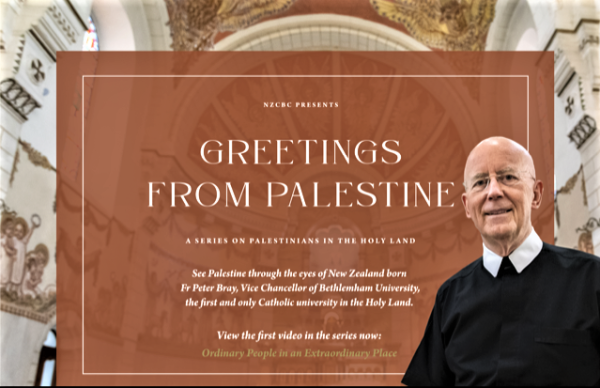 Bethlehem University Vice-Chancellor, Taranaki-raised Br Peter Bray FSC, will give public talks about Palestine when he visits Aotearoa New Zealand early next year, but meanwhile, he is making videos on the subject for a Kiwi audience.

The special series of videos is called Greetings from Bethlehem. It is being made for the NZ Catholic Bishops Conference-Te Huinga o ngā Pīhopa Katorika o Aotearoa.

His first video, Ordinary People in an Extraordinary Place; Palestinians in the Holy Land, can be viewed on YouTube now.

Br Peter says the videos follow the New Zealand bishops publishing a statement on the long-standing Palestine issue in July.

“The bishops mention their concern for the ordinary people in these occupied territories,” says Br Peter.

Bethlehem University was established under Israeli occupation in 1973. It was the first university established in the Occupied West Bank territory of Palestine and is the only Catholic university in the Holy Land.

Immediately before moving to Bethlehem in late 2008, Br Peter, a De La Salle Brother, was the Director and CEO of the Wellington Catholic Education Centre, where he led the creation of a master’s level educational partnership with the Australian Catholic University, and the utilisation of online delivery for the centre’s educational programs. His work as a teacher and education consultant has taken him around the world

The NZCBC will announce details as soon as they are available of when and where Br Peter will speak during his early-2023 New Zealand visit. Meanwhile, we invite you to watch, enjoy and absorb this first of Br Peter’s special videos from the Holy Land.

Caritas Aotearoa New Zealand works with Caritas Jerusalem to help raise funds for the people of Palestine and the work of Bethlehem University. Visit Caritas here to learn more.