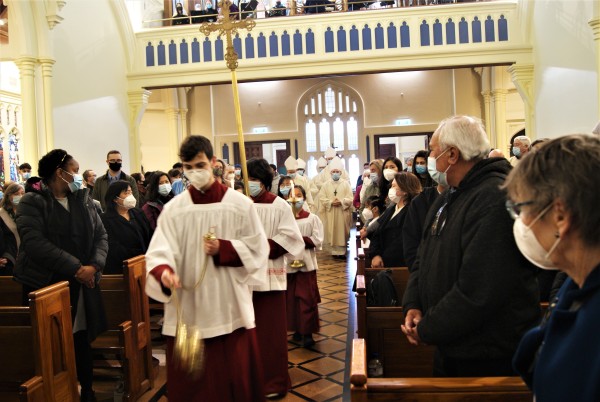 The New Zealand Catholic Bishops Conference warmly thanks the many people who made such a big success of Sunday’s Mass of Dedication of St Mary of the Angel’s church in Wellington as the National Shrine to Mary, Mother of God, Assumed into Heaven.

The century-old landmark St Mary of the Angels was full almost to its 550-person capacity with the colourful diversity of the Catholic Church in Aotearoa New Zealand for the special 2pm Mass on Sunday 14 August.

It was the finale of a year of celebration that began at the church the same Sunday a year ago with a rededication of the country to Mary, followed by a hīkoi (journey) of the specially commissioned artwork, Ko Hāta Maria, te Matua Wahine o te Atua – Holy Mary, Mother of God around the country’s six dioceses.

The artwork icon – by Rangiora artist Damien Walker of the Studio of St Philomena – was carried back in to the church at the start of Sunday’s Dedication Mass and will be on permanent view there as part of the national shrine.

Cardinal John Dew, President of the NZ Catholic Bishops Conference and Archbishop of Wellington, says the bishops wish to thank everyone who worked to make the Mass such a success.

“This was an important event and everything happened so smoothly thanks to the enormous efforts put in by so many, many people,” said Cardinal John.

In his homily as celebrant of the Mass, Cardinal John noted sacred sites were found in many places around the world, such as cathedrals, temples, war memorials, Ground Zero in New York, and in Wellington the tomb of the Venerable Suzanne Aubert and a memorial to the Wahine disaster.

“Sacred sites all over the world are visited by thousands… they may be natural sites or designed and built by human beings. These places often hold deep meaningful messages, are awe-inspiring, they prompt us to reflect on life, on where we are with God, stir up feelings of awe and reverence and draw us close to God.

“St Mary of the Angels is already a sacred place and has been for 100 years. Now this Icon of Mary Mother of God Assumed into Heaven is here permanently… we hope and pray that in time this becomes one of those sacred sites.”

Local college student volunteers carried in the icon as Fr Chris Skinner SM played and sang his song Hata Maria, specially composed for St Mary of the Angels to commemorate the year of events.

Korty Wilson, the Kaiwhakarite Māori Apostolate from Palmerston North Diocese, described the final stages of the hīkoi before the icon's arrival back at the church. Children from Wellington primary schools carried flowers up the aisle to place by the altar. And to the sound of the Pūtātara, the conch-shell trumpt and the lyrics of Mō Maria, the bishops processed to the altar; Cardinal John and concelebrants Archbishop Paul Martin (Wellington) Archbishop Novatus Rugambwa (Apostolic Nuncio), Bishop Steve Lowe (Auckland), Bishop Michael Gielen (Christchurch) and Bishop Michael Dooley (Dunedin).

The country’s first Catholic Bishop, Jean-Baptiste Pompallier, dedicated the country to Mary Assumed into Heaven when he celebrated the first Mass at Totara Point in the Hokianga in January 1838. Last year's Rededication was inspired by the Covid-19 pandemic.

A video of the full service is available here. Ka pai Bradley and Javier of Broad Media Wellington. 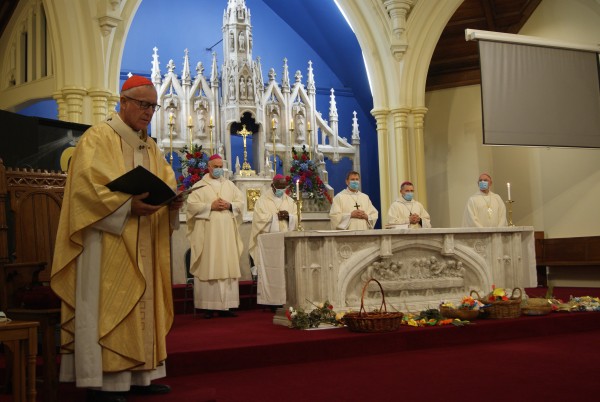 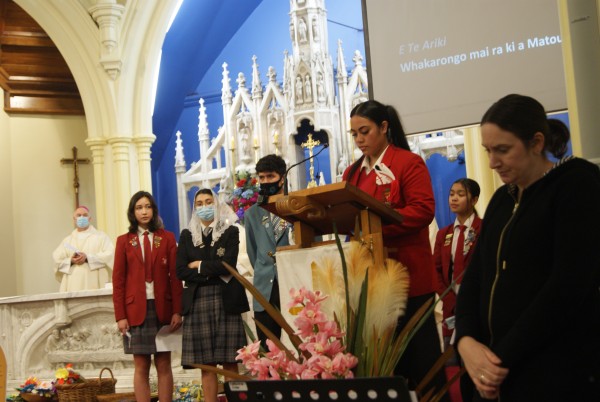