President of the New Zealand Catholic Bishops Conference, Archbishop John Dew of Wellington, believes those behind the atheist bus campaign have the right to express their views, and finds it interesting that they have chosen God as their focus.

Bus“Freedom of speech is a right we all have. I find it interesting that a group of people who claim not to believe in the existence of God have chosen to make God the focus of their bus campaign,” he says.

“The use of the term 'probably' in the proposed advertisement ("There’s probably no God. Now stop worrying and enjoy your life”) could perhaps suggest a degree of uncertainty on the part of campaign organisers”.

“With regard to asking for public donations to put towards the campaign, in New Zealand many groups and organisations look for public money and the public has the freedom to decide how to respond”.

“As for enjoying life, the Gospel is about spreading good news. Christians have always believed life should be enjoyed and celebrated and there is a line in the gospel which speaks about living life to the full.” 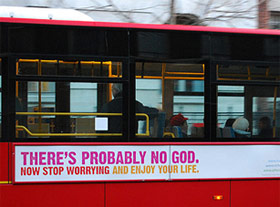